For some reason I was having a very intense craving for casserole.  I wanted to eat something that was baked in cheesy goodness and that I could scoop out of my baking dish and onto a plate.  I know it’s summer and casseroles aren’t summer food but I was jonesing for it in a major way.  I also wanted to try my hand at making something totally vegan.  I’m not vegan but a lot of my friends are and so I thought I’d see if I could make something that satisfied this nagging craving and also helped me learn a little more about cooking vegan. 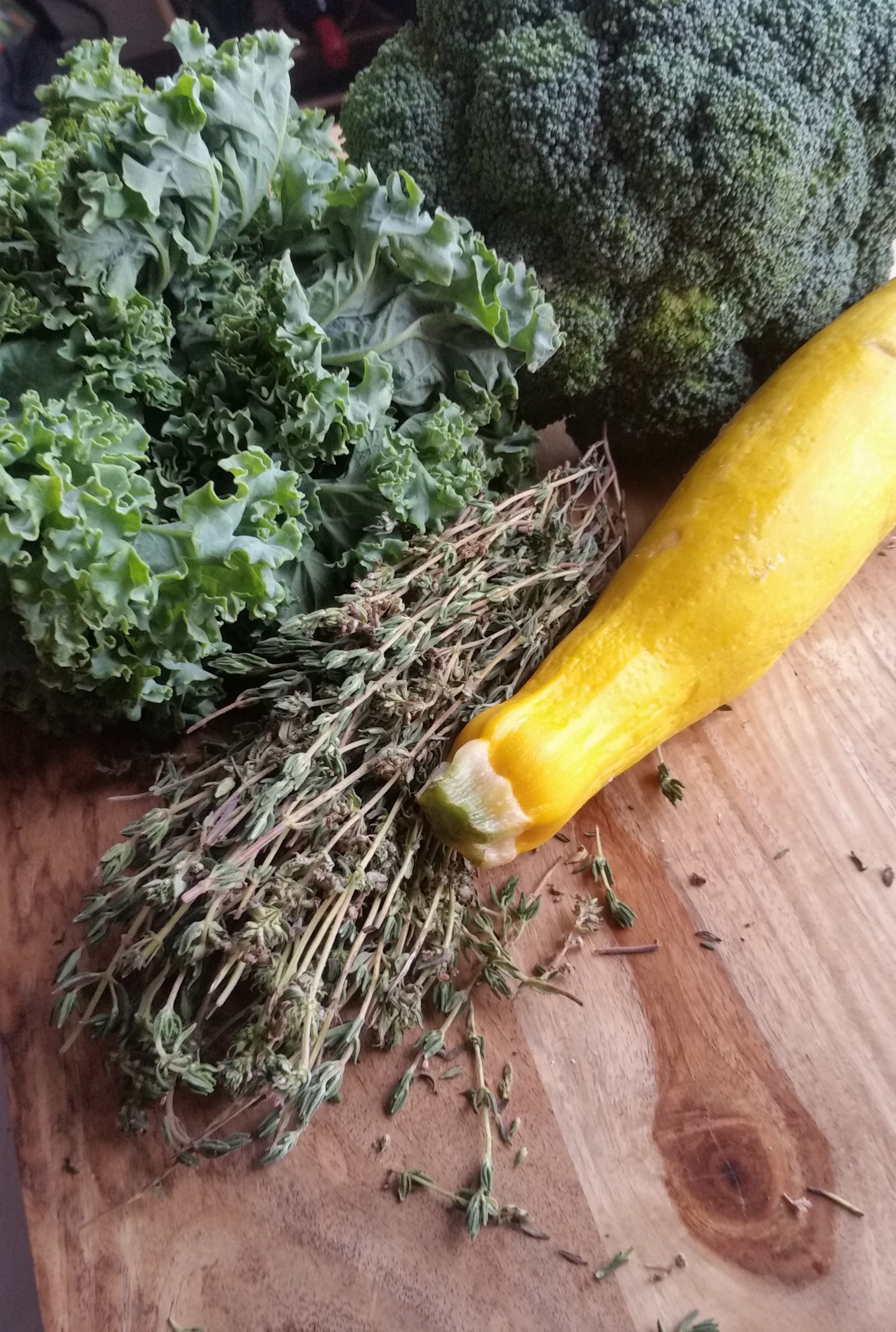 I chose the kale, zucchini and broccoli for the casserole because they seemed like willing participants.  I also got thyme in my FarmBox so I had some aromatics on hand. 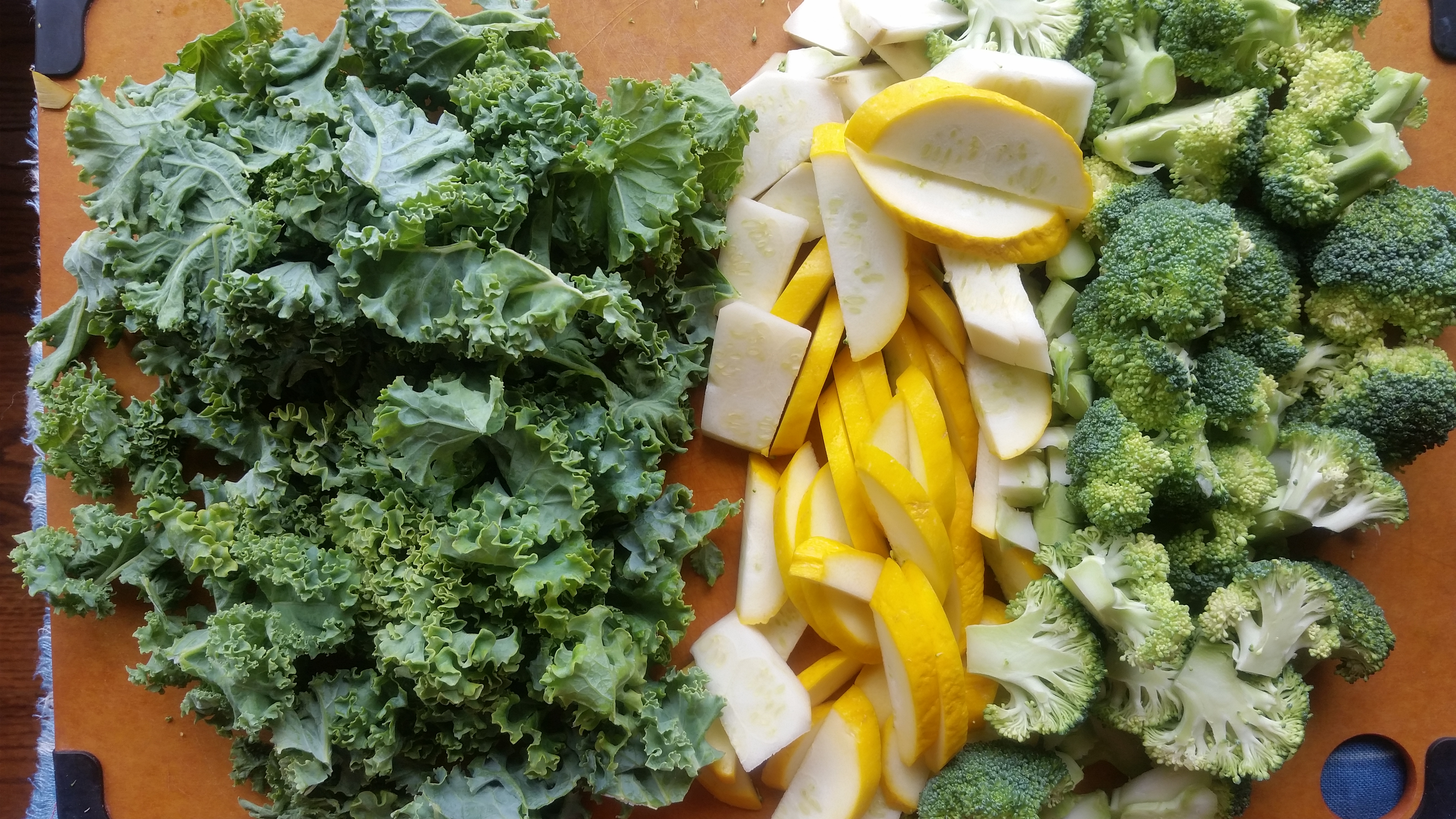 They are so pretty all chopped up aren’t they?  Next, I had to make the “cheese”, which is really just a cashew nut sauce.  I didn’t feel like buying a whole bunch of other new ingredients so I came up with my own recipe that I figured would work.  And man oh man did it.  I tasted the cheese sauce after it came out of the blender and I swear I could have drank it all right then and there.  So good.  SO GOOD. 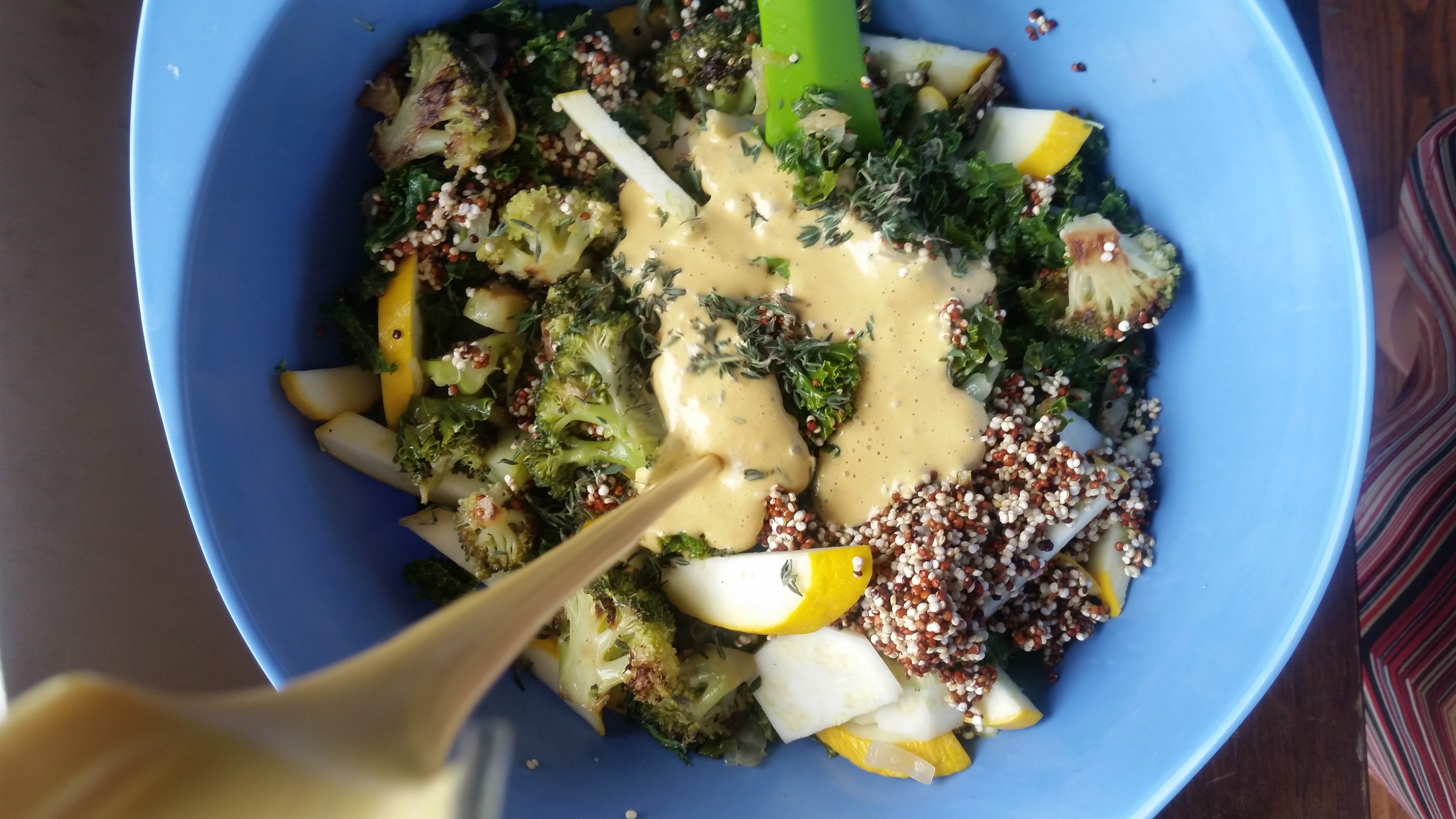 I also decided to add some quinoa to give it a little extra texture and heartyness.  I didn’t want to be starving 30 minutes after eating this. 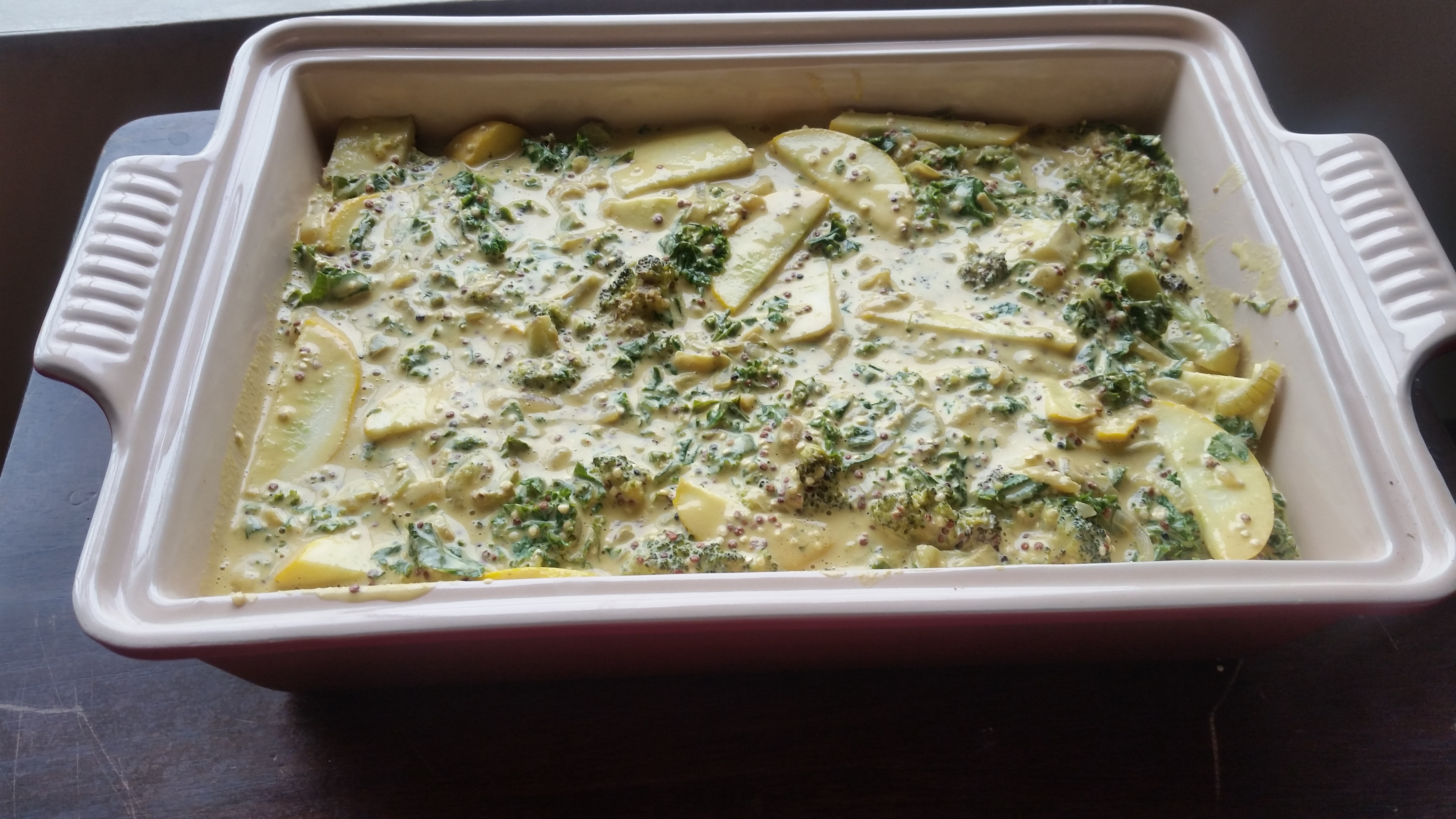 Poured it all into my beautiful baking dish and then into the oven it went! 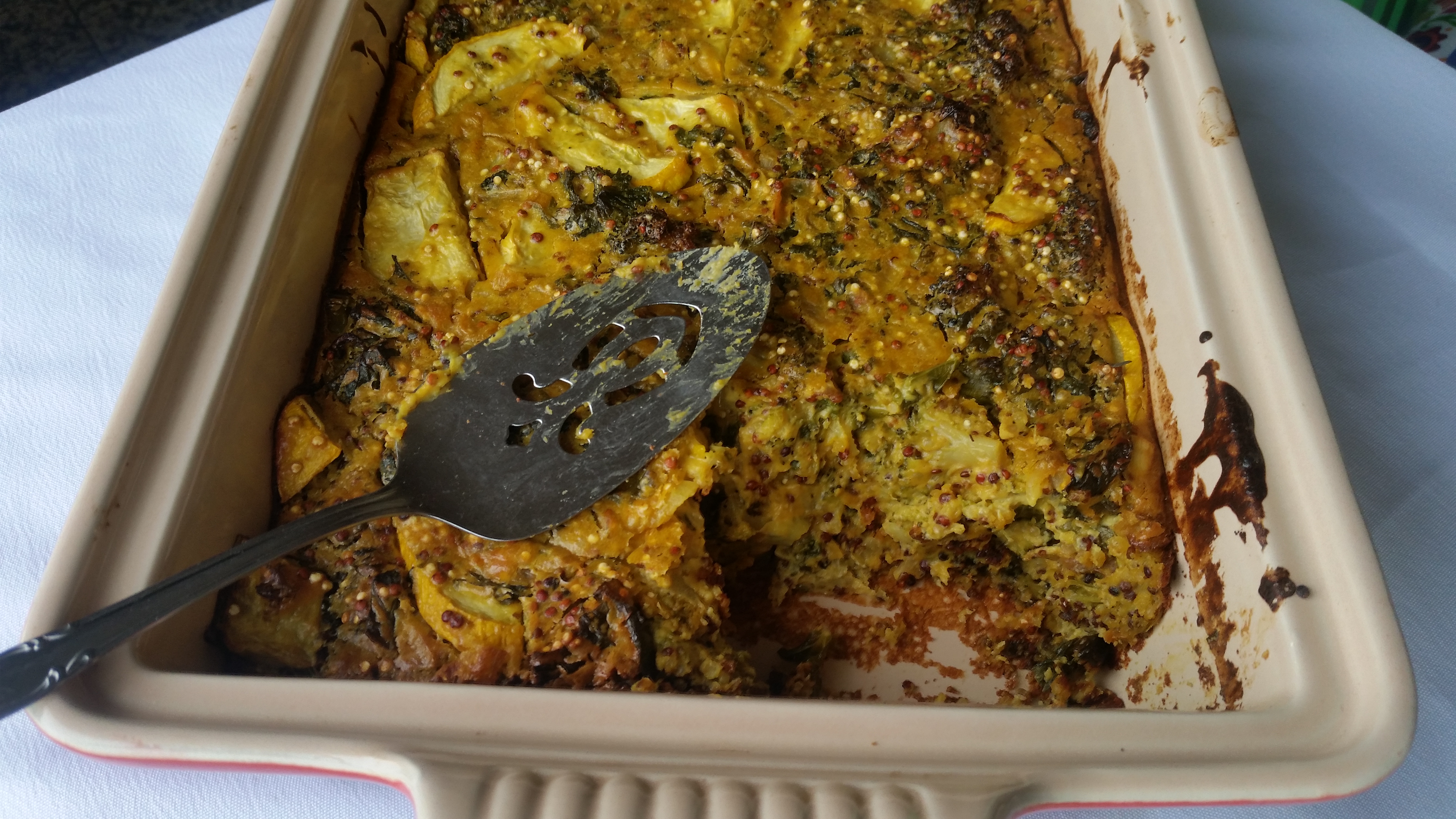 I was so anxious and excited to try it when it came out of the oven that I burned the shit out of my tongue on a bite that was just too damn hot.  I impatiently waited for it to cool and then tried it again.  It was exactly what I had wanted.  It was cheesy, savory, delicious.  The vegetables held their own and the quinoa added a nice texture and flavor.  The “cheese” bound everything together perfectly.  I will definitely be making this again.

Serves 8
Adapted from My Brain!!

Ohh, I definitely have to try macadamia nut cheese… that sounds amazing! I’ve also had some pretty kick ass vegan lasagna and I didn’t miss the meat one bit.