Normally I love to cook Thanksgiving dinner.  Yeah, it’s dinner for me.  Not lunch.  When I was growing up we always had a big family dinner that lasted hours, and went well into the wee hours of the night and on occasion, the morning.  This is because the whole day was spent prepping, cooking and sending my dad out for emergency trips to the grocery store for extra or missing ingredients.  Thanksgiving lunch was just unrealistic for my family. 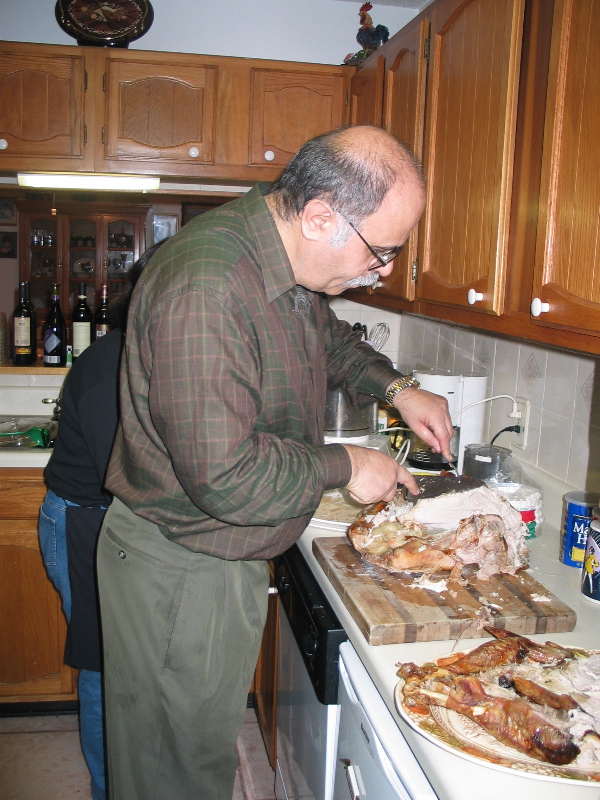 In addition to making last minute trips to the grocery store on Thanksgiving Day, my dad is also the designated carver.

Sometimes it was just my immediate family and at other times we had aunts, uncles, cousins or family friends around the table with us.  The one common theme and thread every year was lots of food and family.  I think this is why Thanksgiving is one of my favorite holidays.  Well, Thanksgiving and Christmas.  And Halloween.  And Easter, I love pastels and dyeing eggs.  Who am I kidding, I love all holidays!  I love traditions, old ones, new ones, I love ritual and decorations and the specialness that comes with each and every holiday.  I know some people grouse about Hallmark holidays and American consumerism and all that jazz.  I say screw them!  Who doesn’t like a damn party?!?!  With special foods and special drinks and special decorations and special traditions and special rituals which I get to share with special people which creates special memories that I will have with me for the rest of my life.  I don’t think my life can have too much specialness in it.  Nope.  There is no upper limit for specialness.  Bring. It. On. 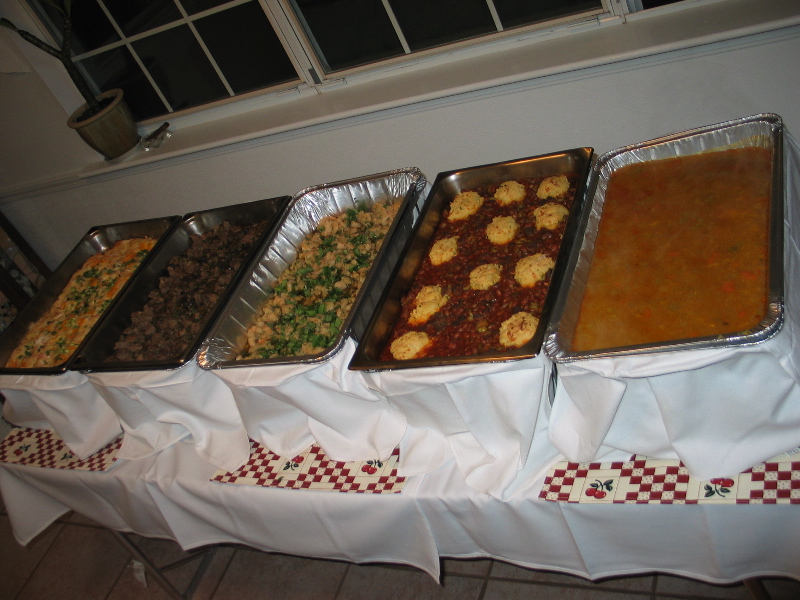 Look at this spread my cousin put together one year. That’s pretty special to me.

When I moved to Los Angeles it became prohibitively expensive for me to fly back to Louisiana for both Thanksgiving and Christmas every year so I had to choose.  I had a few transplant friends in L.A. who were in a similar situation and they were going to be around for Thanksgiving.  They also happened to be my big-time foodie cooking friends so I chose to do Thanksgiving in L.A. with them.  I had a feeling we could make it pretty special.  These people had also become my “chosen family” so I would still have both of my loves for Thanksgiving, food and family. 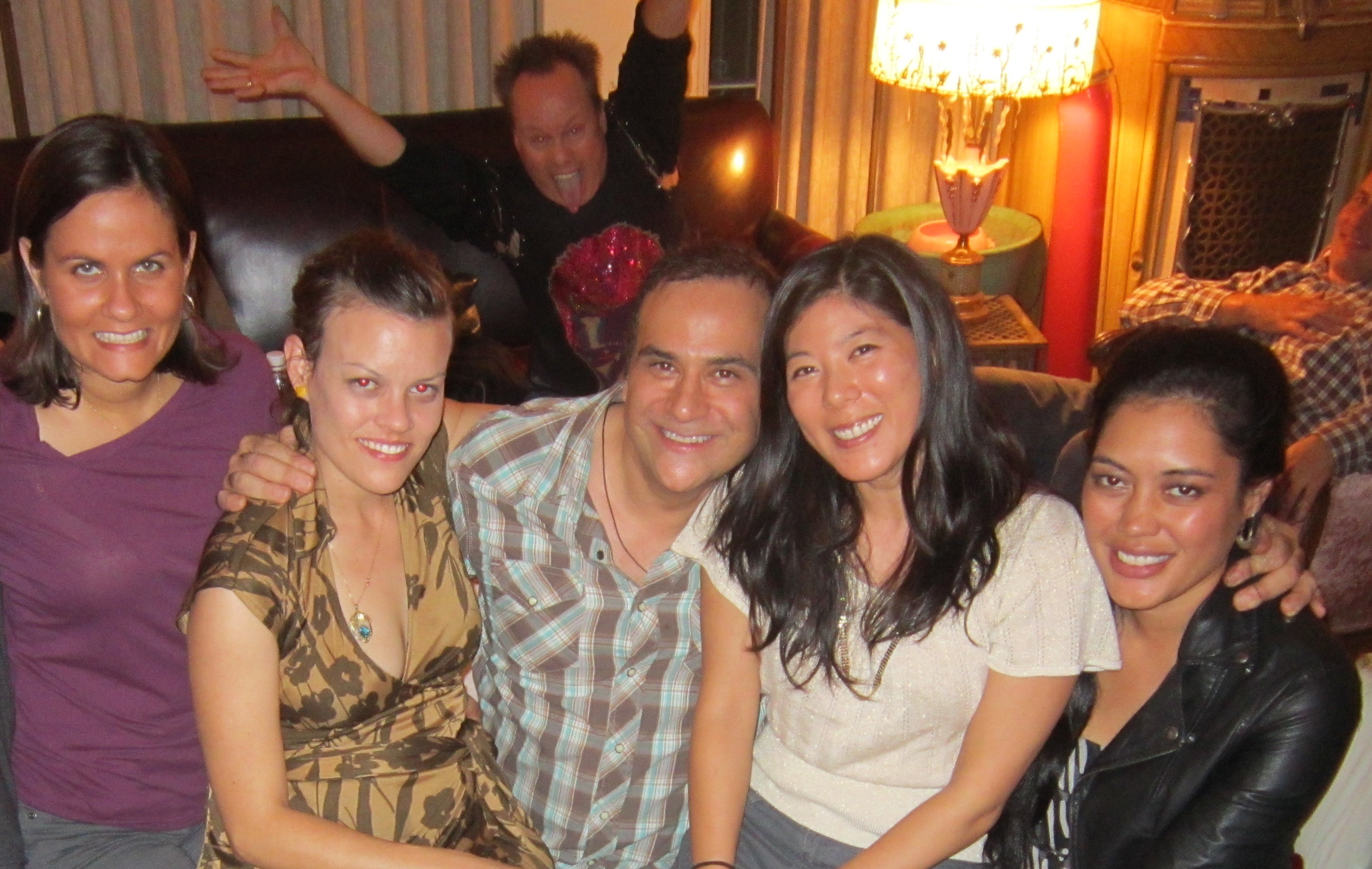 This picture is from Friendsgiving which is always a lively affair. That’s me in purple on the far left.

This core group of friends and I did Thanksgiving together for four years and over the course of those years I fried 3 turkeys and 1 duck, spatchcocked one turkey, made countless sides and one flourless chocolate cake to accompany the salted caramel ice cream that my friend Jaime made.  These dinners were pretty gourmet and epic.  Years 2 through 4 had two turkeys, one fried by me in my Louisiana style turkey fryer and one oven baked by Betsy (always juicy and perfect, the woman has skills).  We always had enough food for 20 people but it was usually just 4 or 5 of us.  We would serve some of the leftovers the next day at Friendsgiving (this was a party we threw for all of our friends who spent Thanksgiving day with their families or their partner’s families) and the rest we divvied up between the cooks so we could freeze them and have a taste of Thanksgiving in January.  Or February.  Or March.  Or August, depending on how brave you are with leftovers. 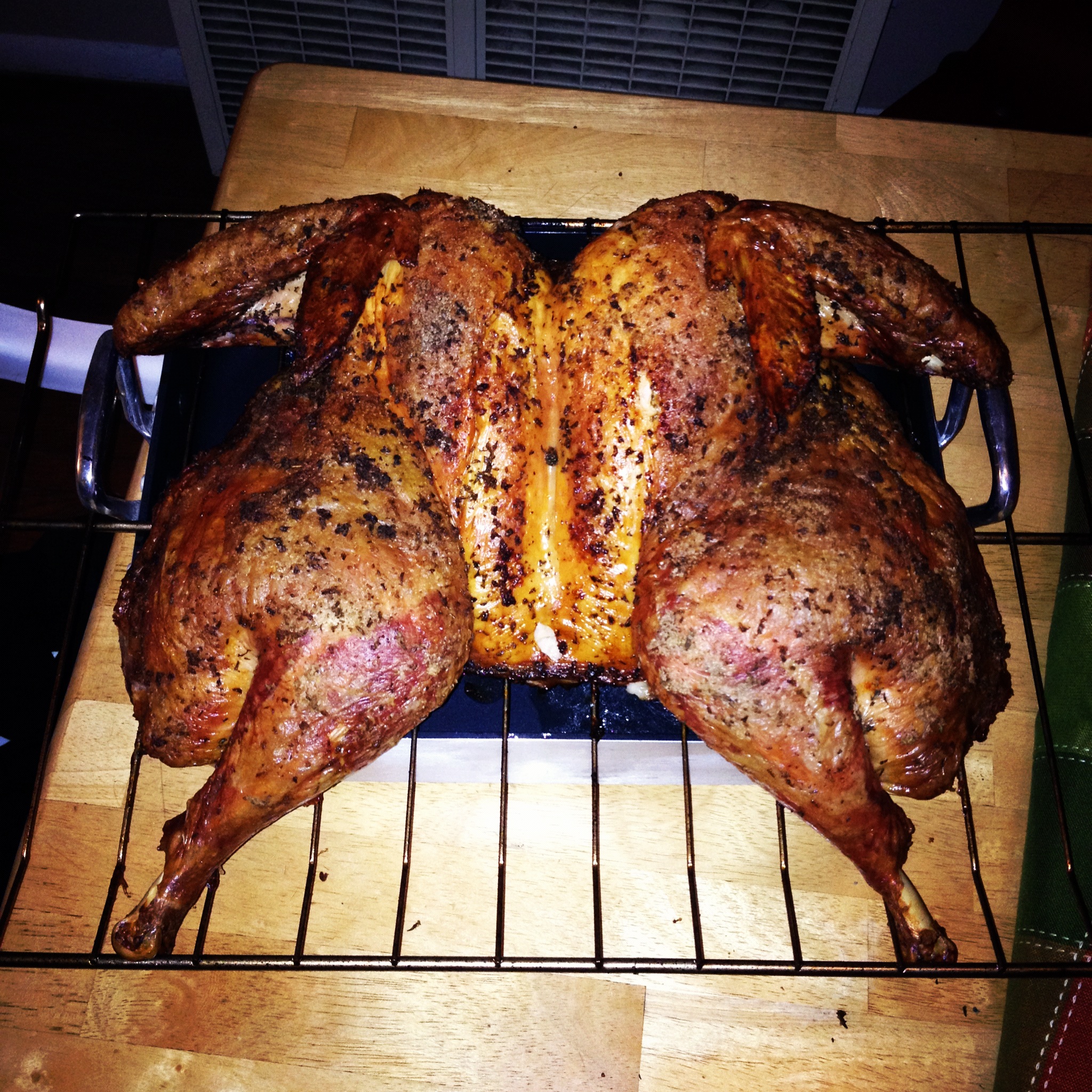 If you’ve never seen a spatchcocked turkey, this is what it is. It’s basically a whole turkey butterflied and roasted in the oven. It’s brilliant.

Last year I cooked Thanksgiving dinner all by myself.  It was a rough year.  I was recently married and my new husband was miserable about being married to me.  The love of his life (not me) wasn’t talking to him temporarily because he went against her wishes and married me.  He was grief stricken at the thought of losing her and resentful towards me for being the reason.  We were supposed to be in New Zealand on our honeymoon for Thanksgiving but he had canceled it because he didn’t want to go.  The relentlessly optimistic and naively hopeful side of me was sort of excited because I thought the alternative of having our first Thanksgiving dinner together was pretty special and had the potential to be sweet and romantic.  Why am I always looking for the pony in the pile of manure?  The reality was that under these circumstances it just turned out to be depressing.

Don’t get me wrong, I made a gorgeous meal and set a beautiful table with all of our wedding gifts and everything tasted and looked amazing.  But it was sad.  It was just the two of us and while he was appreciative of the work I had put into the meal and my unwavering determination to win him over, there was still a dark cloud over our home that even the fluffiest mashed potatoes and the richest, most velvety gravy could not blow away.  There was food, but it didn’t feel like there was a real family.

But my, oh my, it is truly amazing how much can change in such a short period of time.  This year my mom, my future sister-in-law, Liz, and I decided that we should take a family trip together over Thanksgiving.  I liked this idea because my crew of Thanksgiving cooking friends had sort of disbanded due to marriages, moves, being grownups, etc.  So we girls  decided that our families would spend the holiday in Sedona, AZ with a day trip to see the Grand Canyon.  We found a gorgeous house to rent in Sedona and Liz also invited her parents.  Two weeks before the trip, my brother proposed to Liz and she said yes.  Now I have the tremendous honor of being one step closer to calling her my sister and this year Thanksgiving was really going to be all about family. 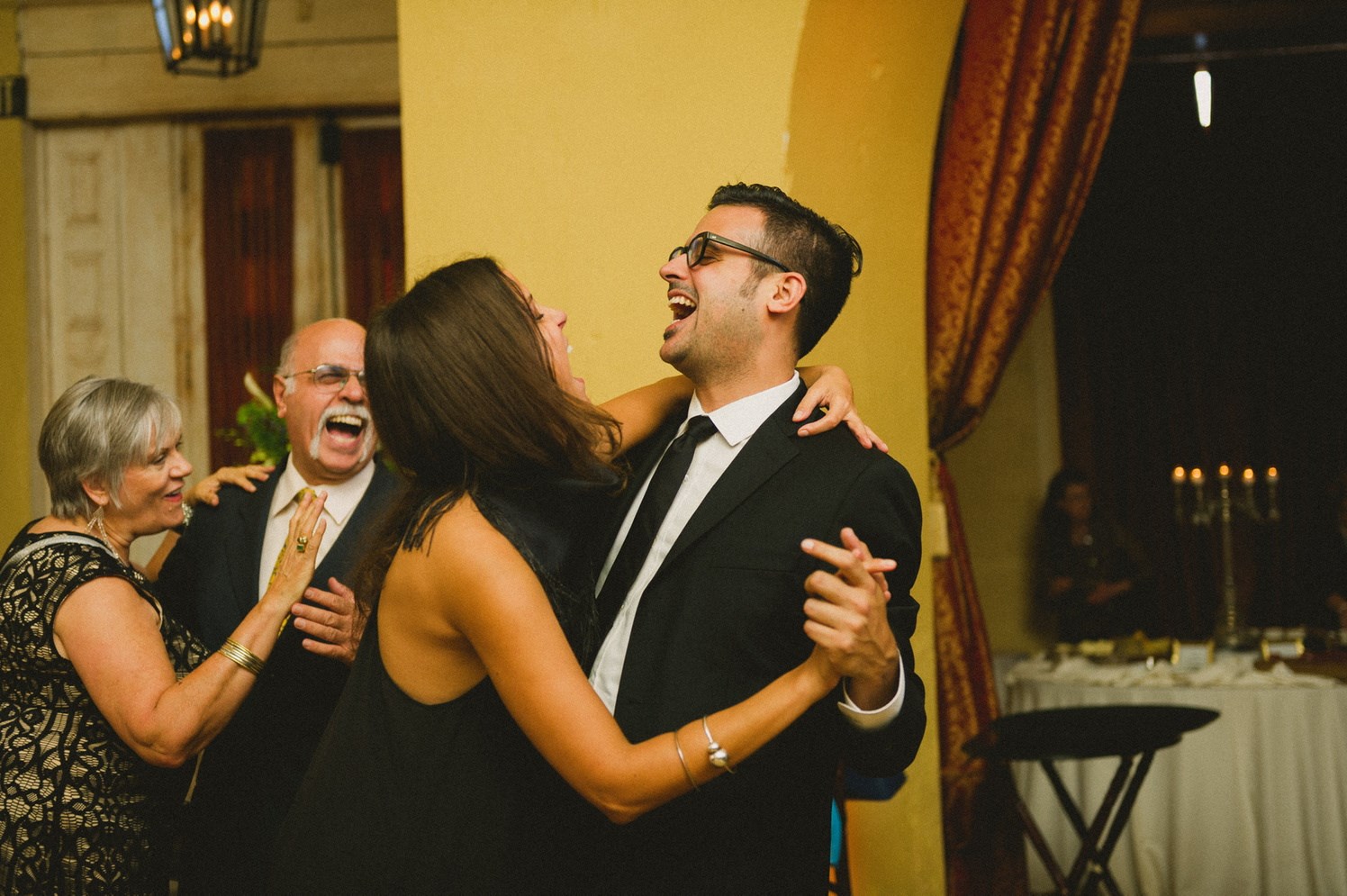 Who wouldn’t want to be related to someone who can make the people you love the most laugh like this?!

Initially there was some talk about cooking dinner ourselves in Sedona.  It was mostly coming from my brother, who can totally cook but, let’s face it, it was going to be me doing all the cooking.  Not because no one else can do it but because I’m super bossy in the kitchen and I have a tendency to take over.  Truth.  The house seemed to be pretty stocked with cooking tools but I didn’t really feel like spending a whole day prepping, chopping, mixing and generally slaving over a stove and I didn’t want anyone else to feel like they had to either.  I wanted instead to spend the day hanging out with family who I don’t get to see very often.  Just Laughing, eating, enjoying everyone’s company and getting to know my new family.  I had never met Liz’s parents before but had only heard amazing things and I wanted to have the chance to soak it all up. 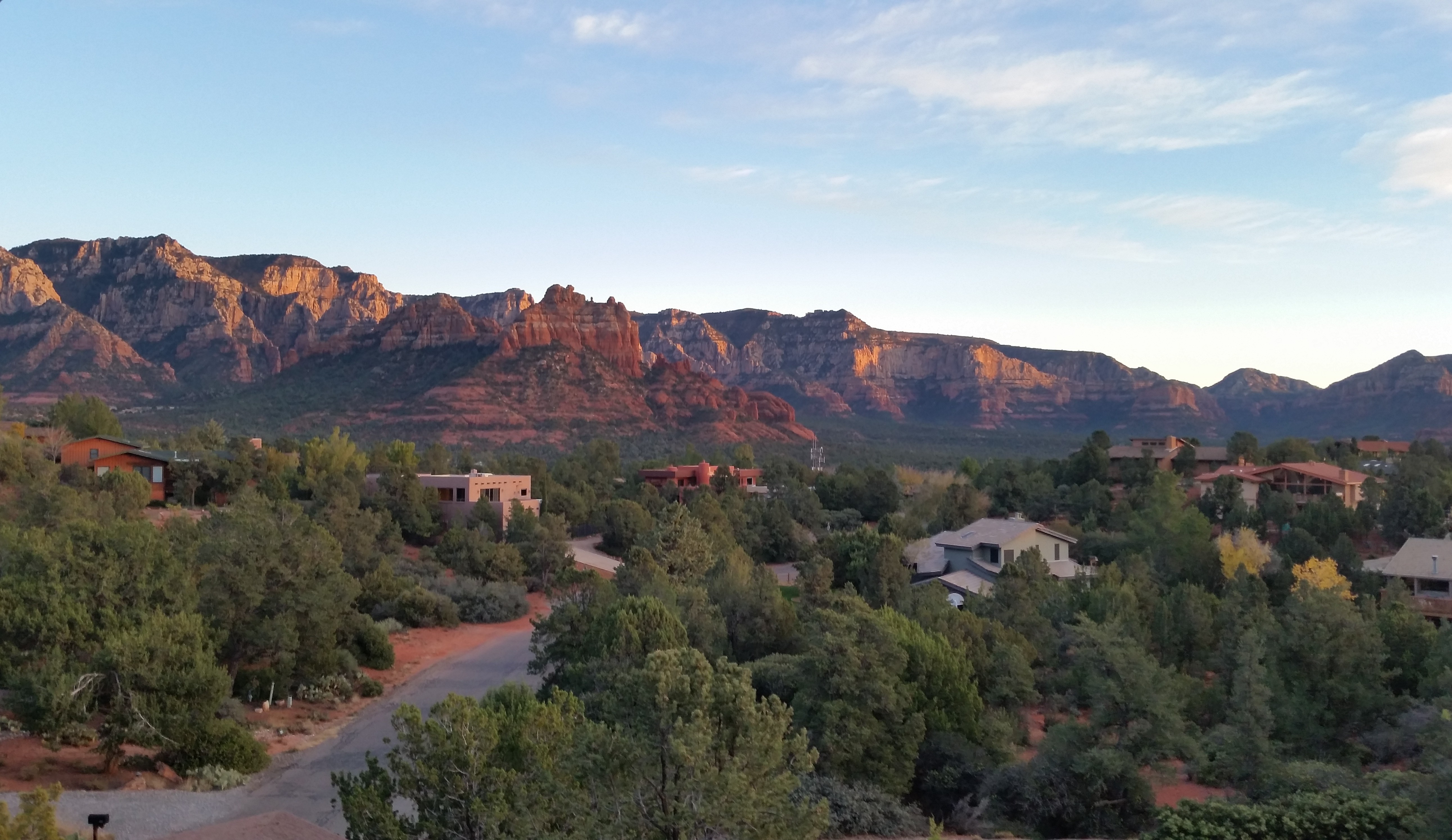 I love cooking and all but I think that sipping wine by the fire pit with this view in the background was a better way to spend my time.

Eventually we came to a consensus that Thanksgiving would be catered by Whole Foods.  Aside from the fustercluck we experienced while checking out (twice!), it was the best idea ever.  The food was deliciously well executed and had all the flavors of Thanksgiving that I crave.  We picked the food up on the morning of, along with a bunch of other provisions and then went about our day which included pre-hike Thanksgiving nachos made by me (the only cooking I did), a 2 hour hike through the red rocks of Sedona, a delicious meal that only took 1 hour to heat up, lots of wine, Jay’s Famous Old Fashioneds, food, conversation, a few intense rounds of Jenga and countless belly laughs.  The next day we were already talking about where we should all go next year for Thanksgiving.  I think I feel a new tradition brewing. 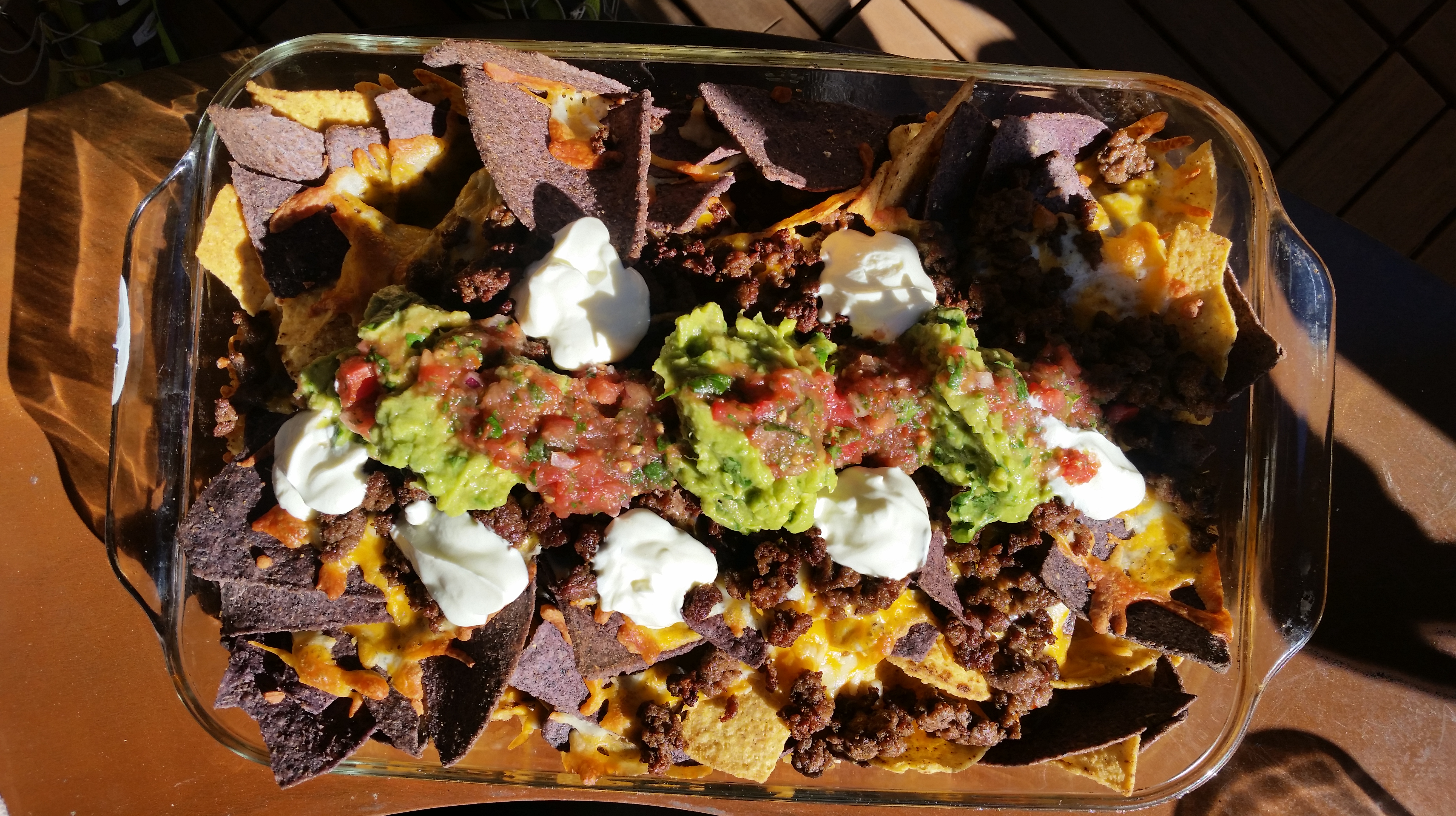 Sun drenched Thanksgiving nachos. Pro tip from my brother: use thicker corn chips so they stand up to the hearty toppings.

There was some crazy talk about how “We’ll never cook another Thanksgiving again!”  Yes, it was great to have the meal all ready to go for us, and it tasted excellent.  I would most certainly do it again next year, but I do love cooking Thanksgiving dinner.  And while I may not do it next year or even the year after that, I am pretty sure that I will do it again in this lifetime because things change, life happens and traditions come and go.   But one thing is for sure; Thanksgiving will always be about family first and then food.

Thanks! We had a really great time and those nachos were amazing 😉

I absolutely loved these photos. It showed what the holidays is all about… family, friends, good food, and a good time. Great post

Thank you so much Kay!