My CSA Box: The Early Days

When I first signed up to be a part of the Silverlake Farms CSA, I was married.  I lived with my husband of 7 months in Silverlake and thought it would be awesome to have a steady supply of fresh, locally grown, produce delivered to our doorstep.  I already cooked a lot for the both of us but wanted more fresh veggies in our diet. I chose the Family Share because well, we were supposed to be a family. And it seemed like just enough fruits and veggies to last two people about a week.

It turned out that I was right. The food I made from the first box lasted about a week between the two of us. I made dinner at night for both of us and then I took the leftovers to work the next day for lunch. It was great. I was hooked on the CSA life.

I got almost all of the recipes and ideas from Googling that shit. That’s kind of how I live my life. I Google shit. I figure most of the things I want to know how to do have already been done and someone has been generous enough to put it on the internet so why should I reinvent the wheel? I’ll just Google that shit, watch the Youtube or read the directions and be done. 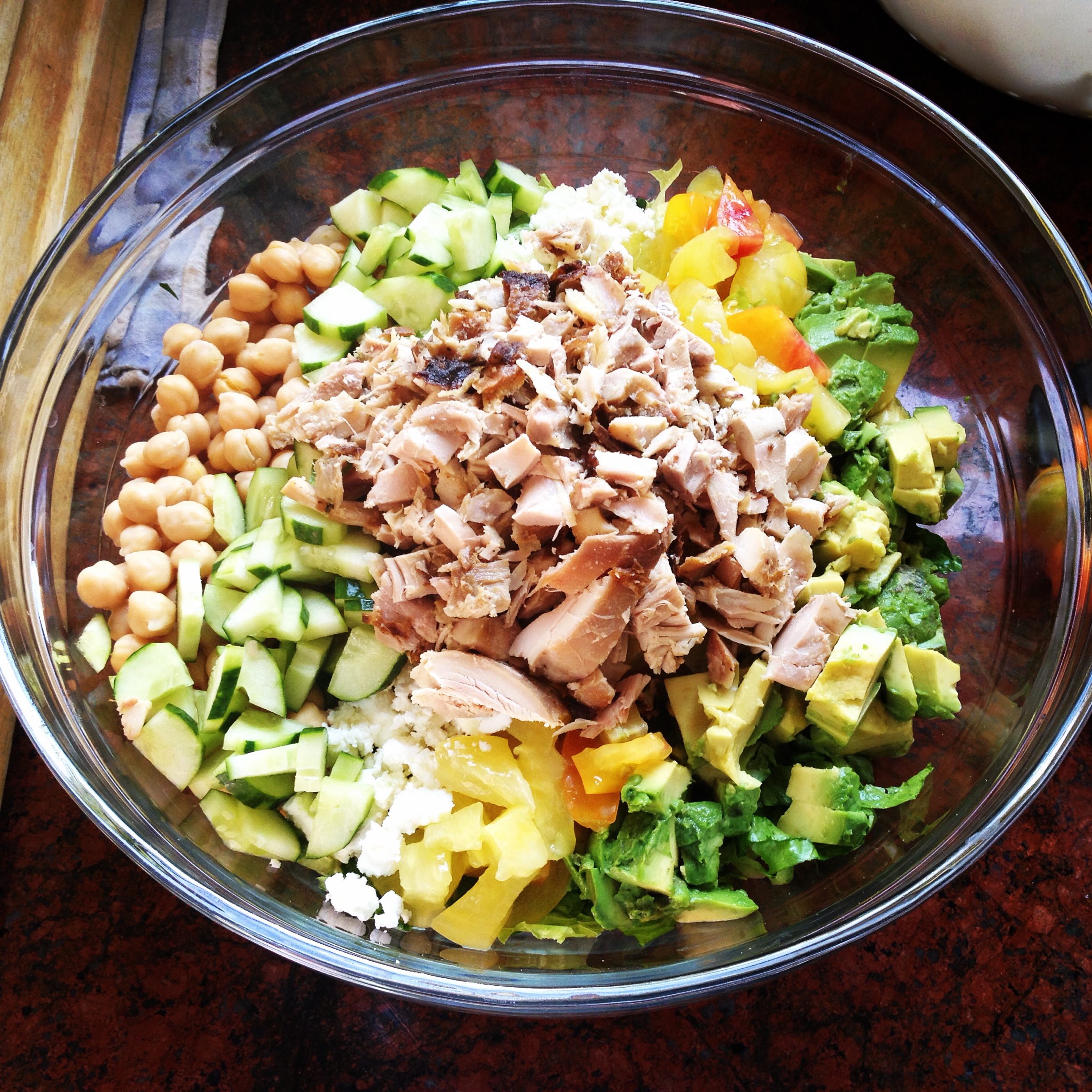 I Googled “romaine kale” for this puppy

I did make modifications to some of the recipes or used recipes for inspiration in creating other dishes. I don’t control what comes in the box every other week so sometimes I have to get creative… and that’s the part I love. That’s also the part I’m excited to share.

The second box came in mid-July after we had come back from visiting my in-laws in Poland. We got an email with our list of goodies on Thursday afternoon and I started to research recipes online. The ingredients were all about summer: melons, tomatoes, cucumber, basil, grapes, romaine, kale (there’s always kale), carrots and potatoes. I had also signed us up for the Community Seafood share which gave us one delivery a month of fresh seafood caught by local fisherman in Santa Barbara. This month it was white sea bass.

I tried to keep the menu pretty simple and decided to make the following: a caprese salad with the tomatoes and basil from the box and burrata, a chopped salad with a yellow tomato , romaine, kale and cucumber from the box. I added some leftover chicken, feta, avocado and chickpeas to the salad as well. The rest of the basil was blended into pesto with lemon juice from the lemon tree in our yard and one of the melons got wrapped in prosciutto. The fish was going to be broiled and served with a brown butter sauce and roasted potatoes. We ate the grapes and watermelon raw and I’m not sure what I did with the carrots. I’ll confess that it’s possible they ended up in the compost as a gourmet feast for the earthworms. I’m not a huge fan of carrots.

I put the caprese, melon wrapped prosciutto and cut up watermelon on the kitchen table for lunch and thought “this is kinda pretty”. I was especially loving how the caprese turned out. I started snapping pics of the food and then posted it online. I thought, “next time I should take a picture of the whole box and then what I made with it!” And that’s what I did… sort of. 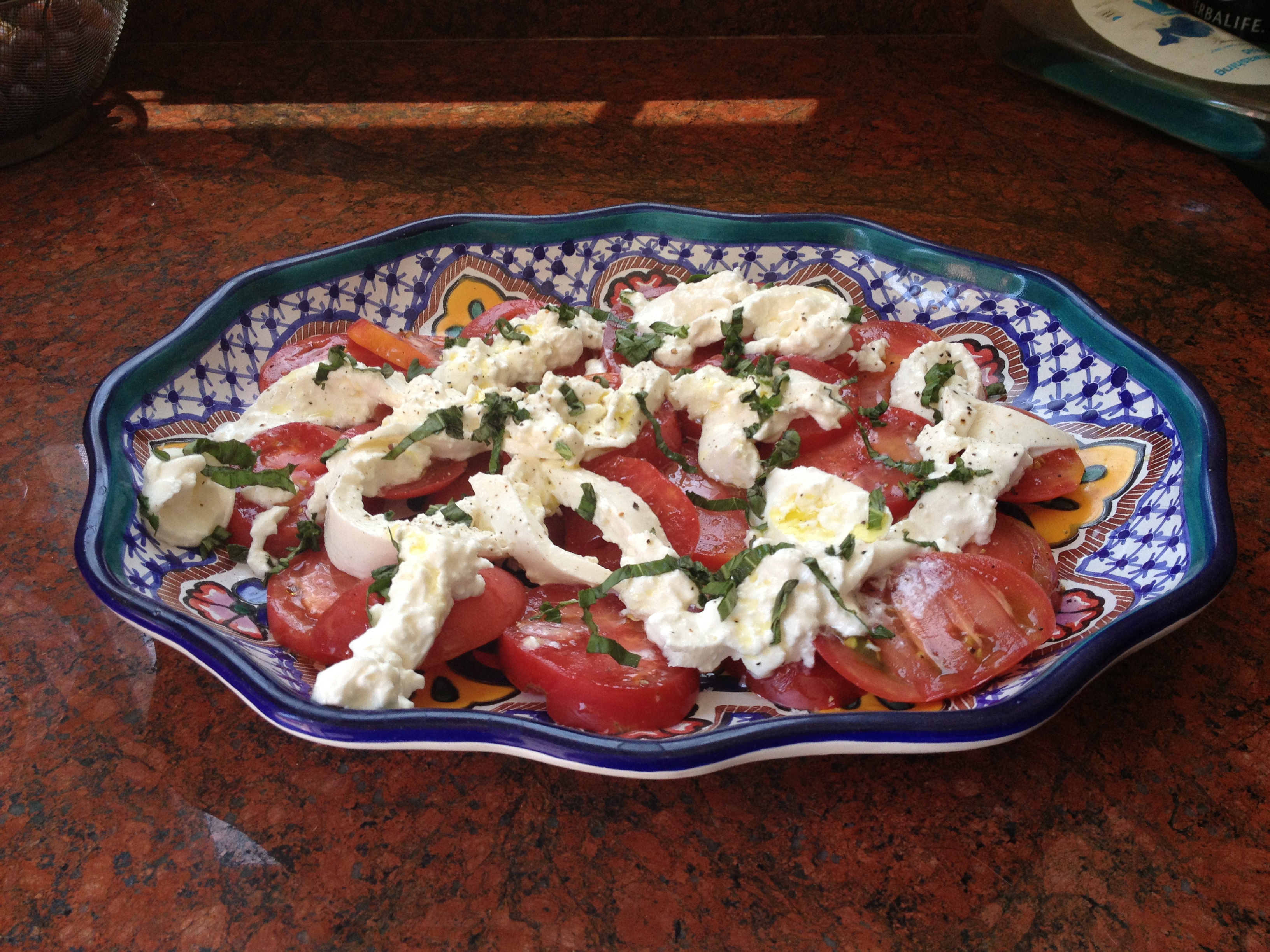 Even tastier than it looks

A week later I found out that my husband was having an affair and I asked him for a divorce. It was the hardest thing I’ve ever had to do in my life.  I didn’t really want to leave but at the same time I couldn’t stay under those conditions.  Five days after that, the CSA box arrived. I took all of the gorgeous items out of the box, arranged them on the kitchen table, took a picture, posted it, put the fruits and veggies back in the box and left it there, sitting on a chair. I just didn’t have it in me. I was too sad to cook and didn’t see the point since there was no “family” to cook for anymore.

I spent the next week packing up and moving out. Over the course of that week I watched that box of fruits and veggies just wither and rot in the box. It seemed like a fitting metaphor. I called it The Divorce Box. 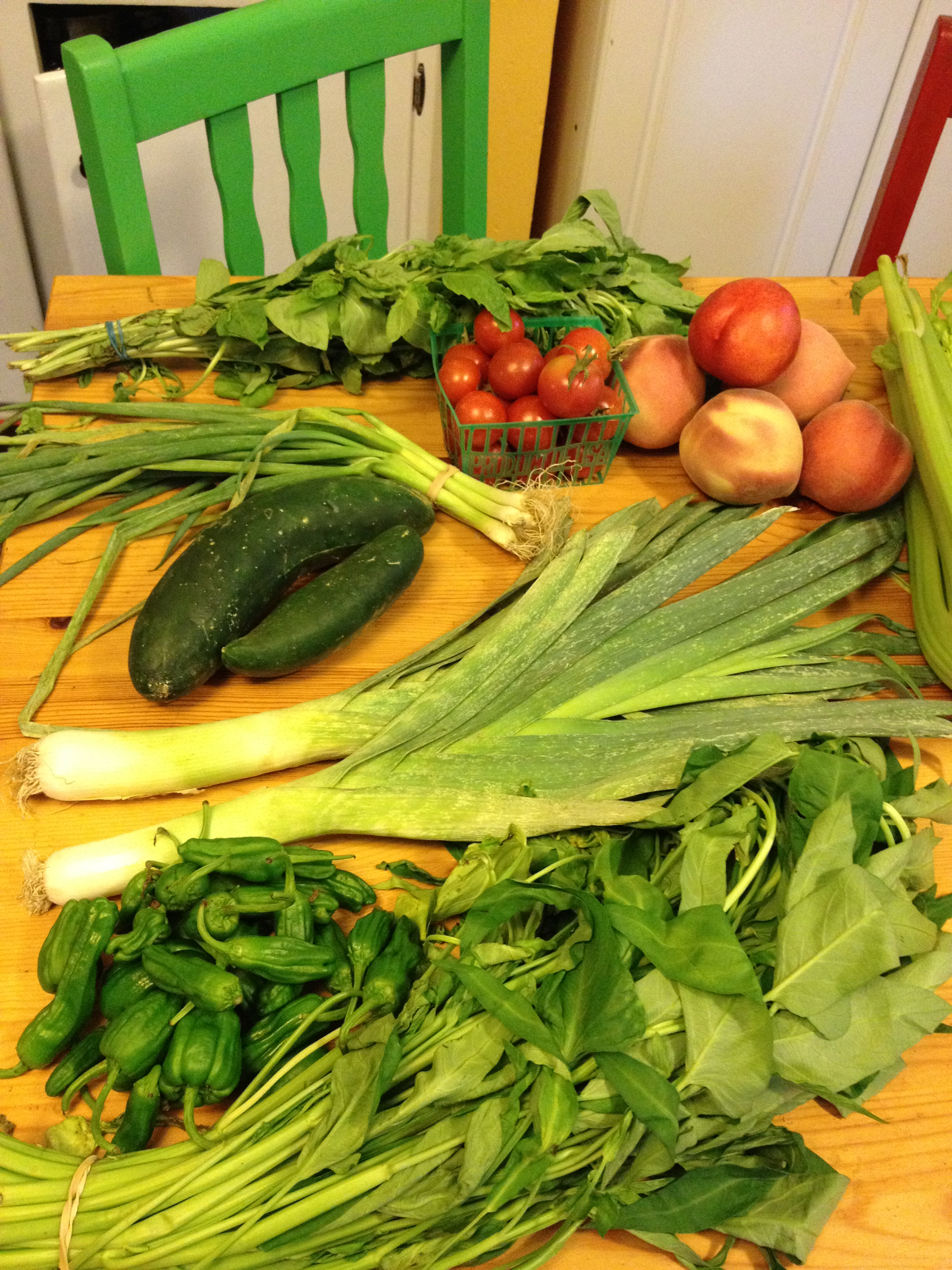 The contents of The Divorce Box… heartbreaking isn’t it?

On August first I moved out and dumped the contents of the box into the compost. I decided that maybe being reincarnated as a worm wouldn’t be such a bad thing… lucky bastards. I settled into my new digs and a week after that another box arrived at my new home. Even though I was sad, heartbroken and stressed out, I had more energy than I had had in years. I had new lease on my life and I was ready to do something fun and exciting with all this time and energy that I had given to myself.

I did what I told myself I was going to do. I took a picture of what was in the box and then I took photos of what I made and here we are.  Looking forward, not back.

What about you?  Have you ever thrown something heartbreaking into the compost?  Either literally or metaphorically?  Leave your story in the comments.

[…] intentionally easy vegetable recipes.  Read her heartfelt and inspiring story in Why CSA?  and My CSA Box: The Early Days.  For tons of creative recipes, check out these other areas of her site:  Side […]

I think you’re fabulous. I love the way you write. Thanks for sharing so vulnerably. Congrats on all of your success so far!