Do you know what’s so special about Hatch Chiles?  I didn’t either.  But I got a call from a friend who was in my neck of the woods because they were selling these at my local grocer.  She is originally from New Mexico where these beauties are a seasonal delicacy.  Apparently people go nuts over these chiles every year when they come into season.  My friend had some time to kill before the chile roasting began so we grabbed a drink down the street.  I asked her more about the chiles and her enthusiasm was infectious.  Next thing I know I’m standing in line with my receipt for a case of Hatch Chiles.  I have no idea what a Hatch Chile is, what it tastes like or what to do with it but now I own a whole case of those suckers… roasted. 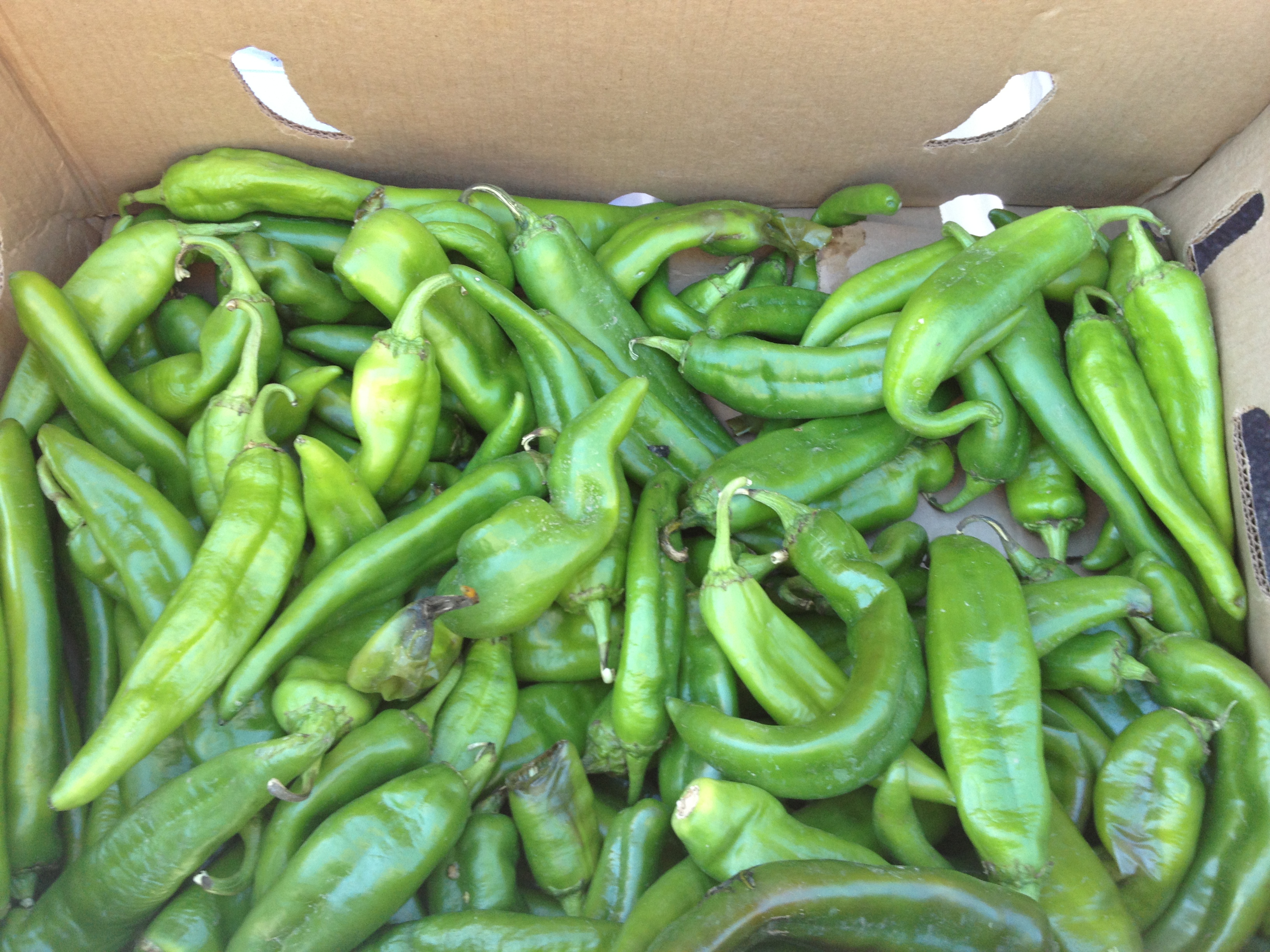 These are hatch chiles in the raw 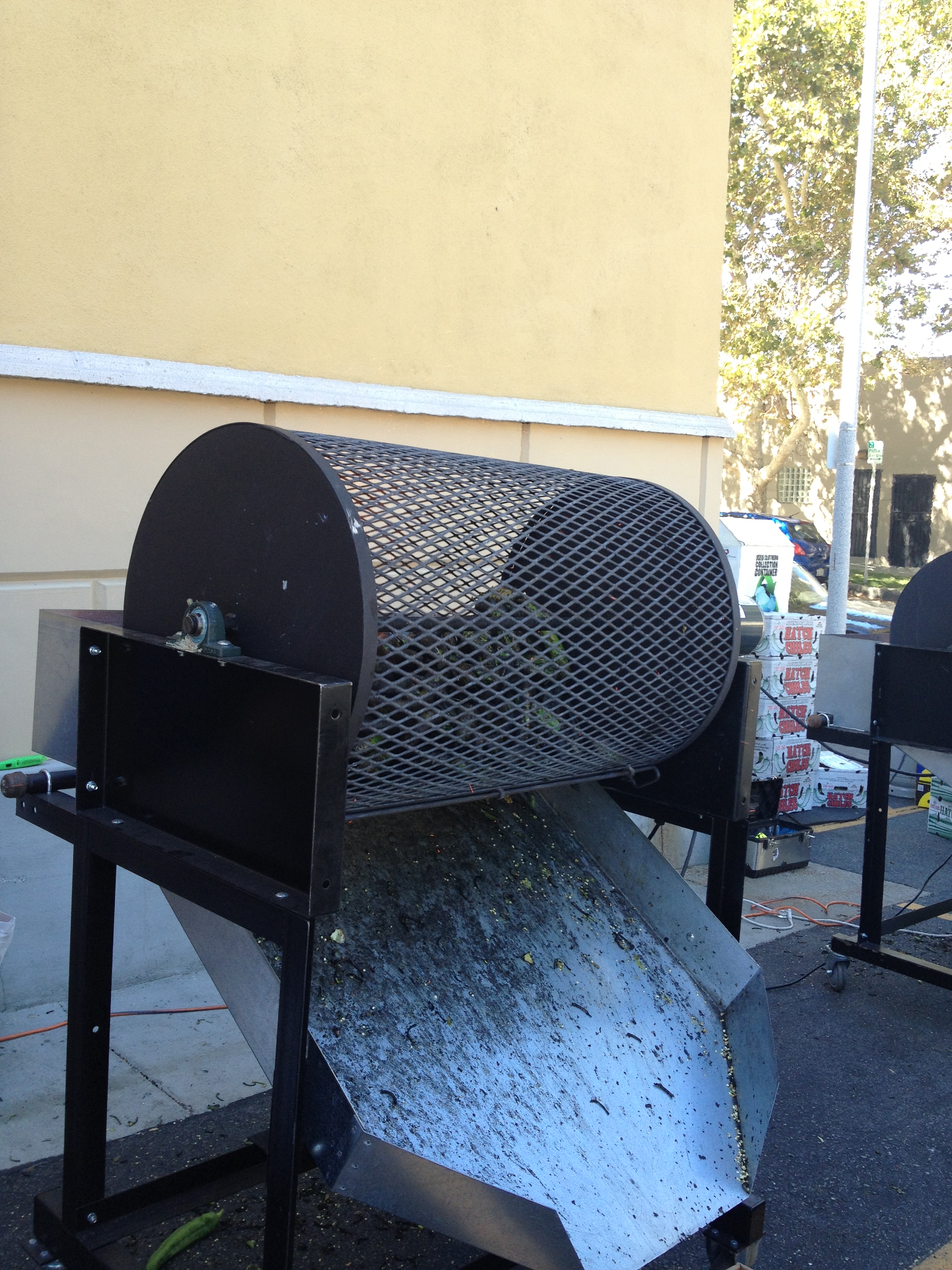 Here is my case of chiles, tumbling around in the roaster while I wait. At this point I had no idea what I was in for.

I took my box of roasted chiles home and started researching what the hell to do with them.  After some quick research I realized that they would not all be consumed today and that the best way to preserve my chile booty was to peel, seed and freeze them.  This way I could take my time to gather the other ingredients to make the best green chile sauce known to man.

I actually had made green chile sauce before.  The recipe I used called for a few different kinds of chile but I figured I would just sub out those chiles for my special roasted hatch chiles and it would be great.  I tasted a couple of the chiles with salt and butter spread on them and I have to say, they do have a really good flavor all their own. 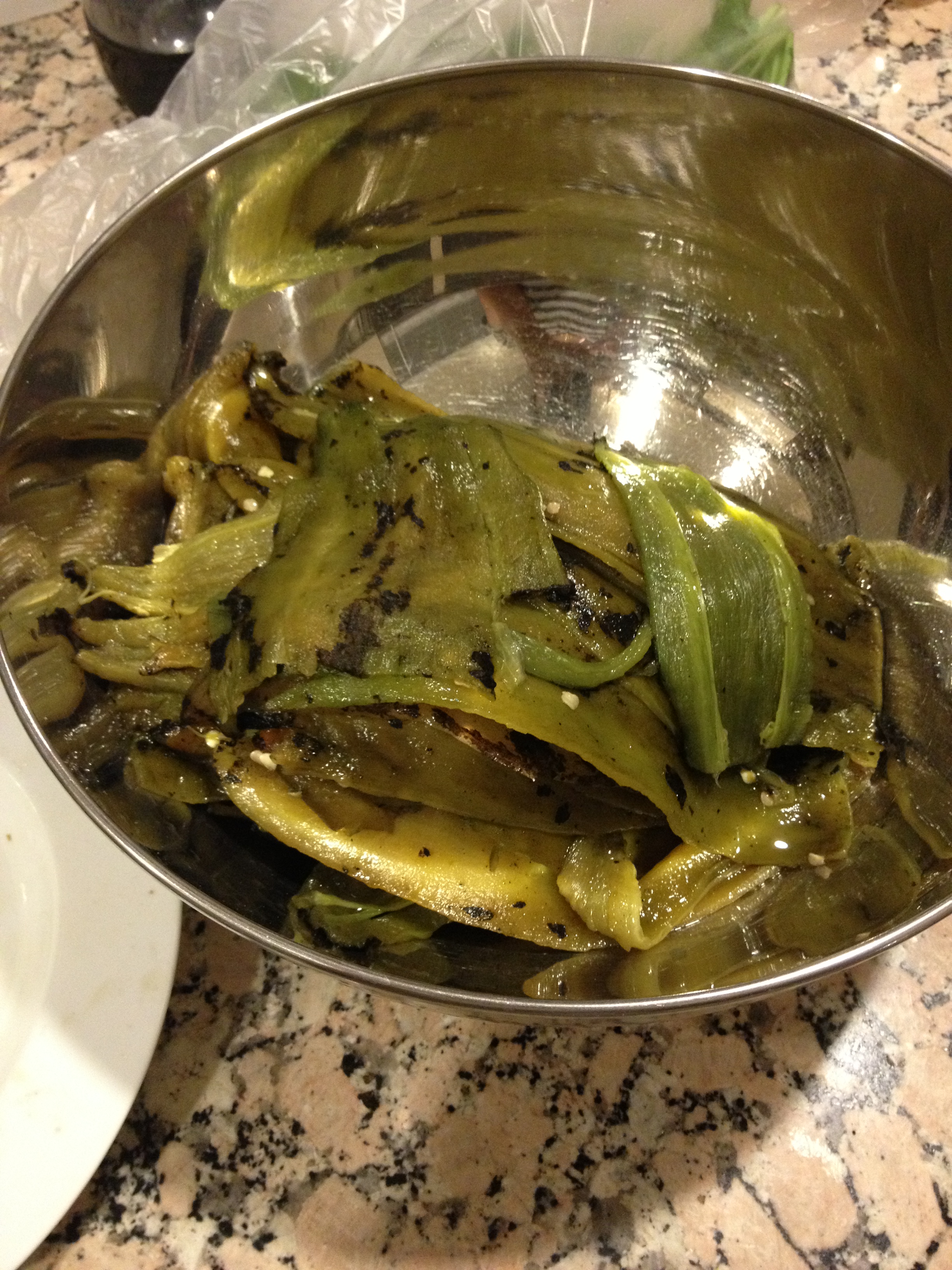 These are my beautifully peeled and seeded chiles, ready for the freezer.

Even after a couple HOURS of peeling and seeding I still had more to go.  This is when I opened a bottle of wine and thought “what the hell was I thinking”. 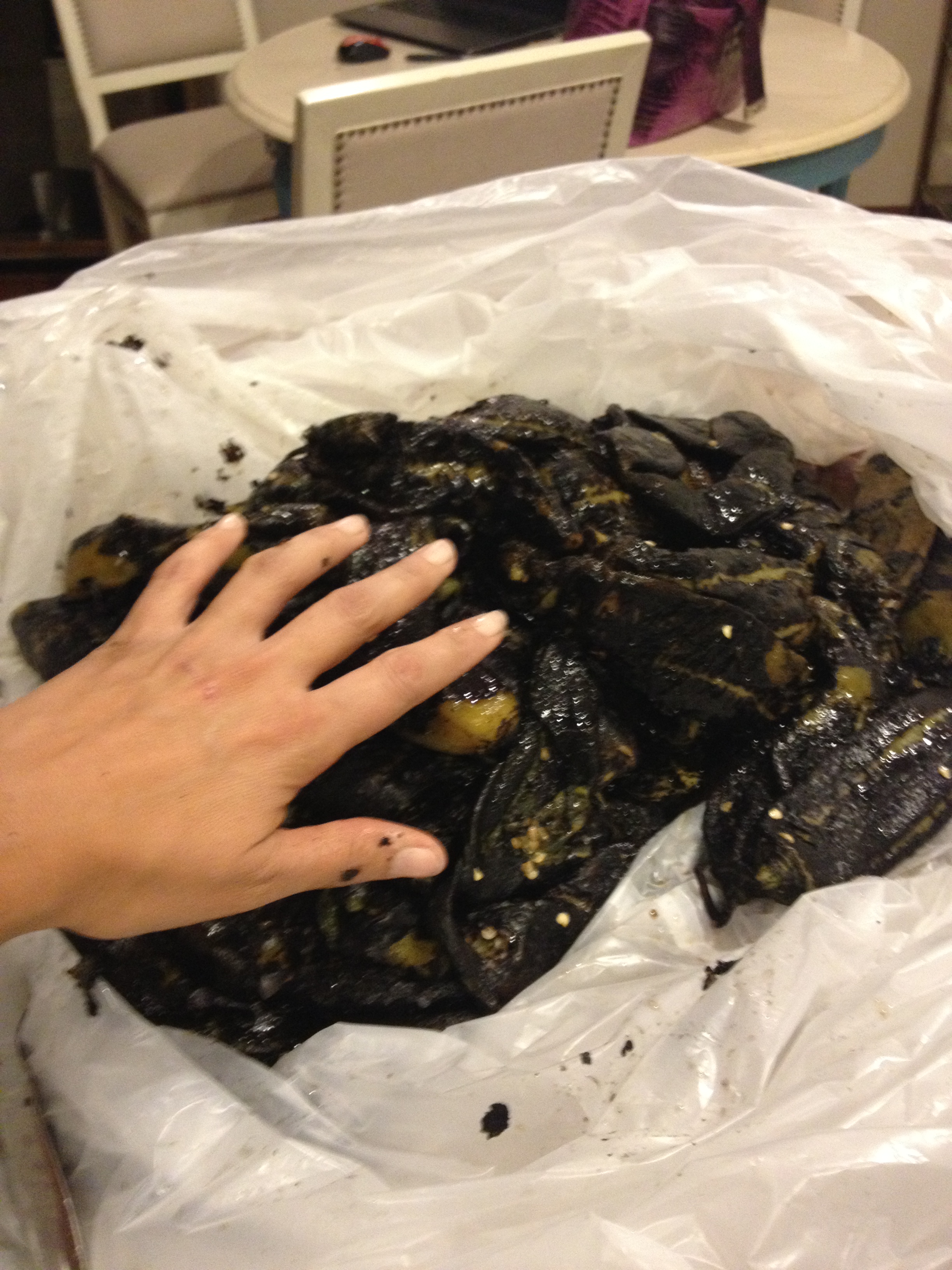 Still so many more chiles to peel and seed! 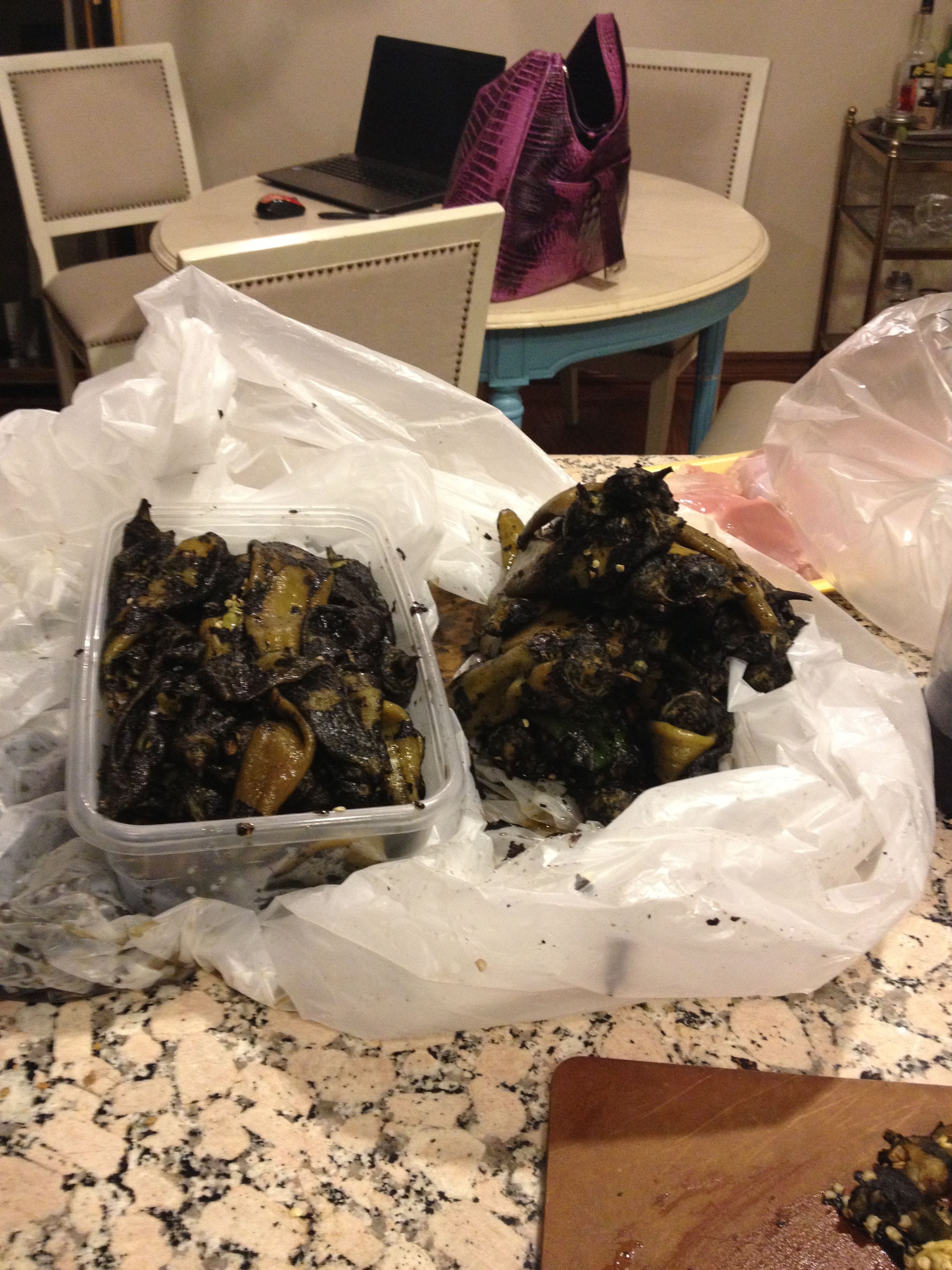 At some point I just split the remaining chiles into 2 batches and decided I would finish peeling and seeding the batch on the left and the batch on the right would have to go into the freezer as is.

A couple of weeks later, after I had recovered from the trauma of the chile debacle, I decided to gather the ingredients to make green chile sauce.  I followed this recipe but replaced the 4 Italian frying peppers and the 3 jalapeno peppers with 6 peeled and seeded hatch chiles.  I ate some of it over rice and the rest I used to make chicken enchiladas.

I still had SO MANY chiles left so I decided to make another big batch of green chile sauce for the LA Food Swap.  It was my first time participating and I was really excited to do some fun stuff and unload some of these chiles.  I made the chile sauce but didn’t shred the chicken and add it back.  I just used the broth and made a “meatless” version.  It still had chicken broth in it but I figured it was more versatile this way and people could use it with other meats if they wanted.

You might be saying “what the hell is a food swap”?  It’s a group of people who get together to trade stuff that they make at home.  The LA Food Swap is open to anyone but is usually limited to a max of 20 or so people.  It was really cool to see what everyone else had made and it was also great to give away stuff that I had made.

I wanted to bring more stuff to the Food Swap and since I have a lemon tree in my backyard I decided to do some lemon stuff.  This tree always has lemons on it which is kinda crazy.  Don’t lemons have a season?  If they do, this tree did not get the memo. 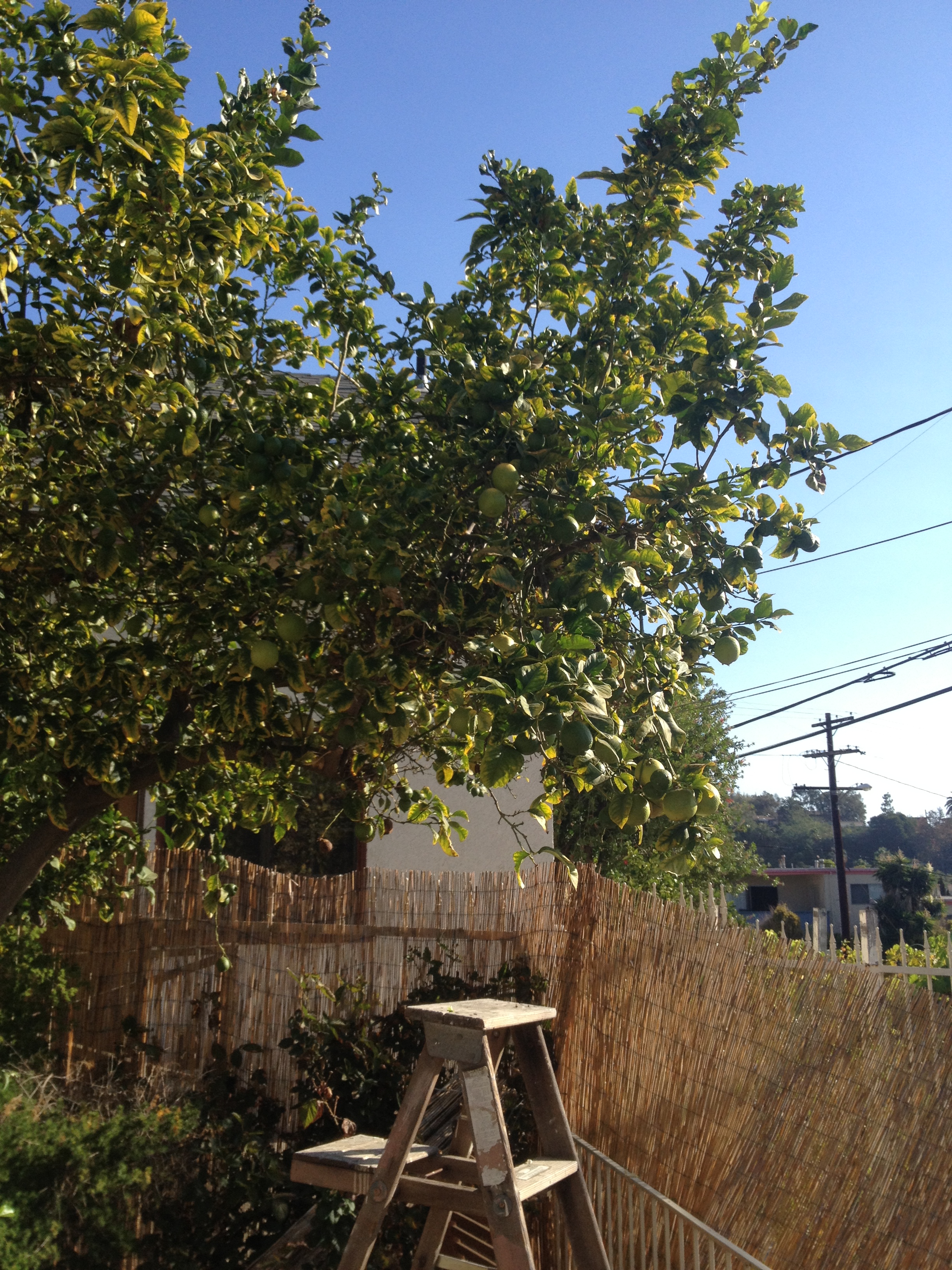 I had a friend who had done the swap before and she gave me some tips like: 1) booze is always popular and you can trade well for it 2) good presentation goes a long way.  I decided to take these suggestions seriously and I made some Limoncello with ginger. 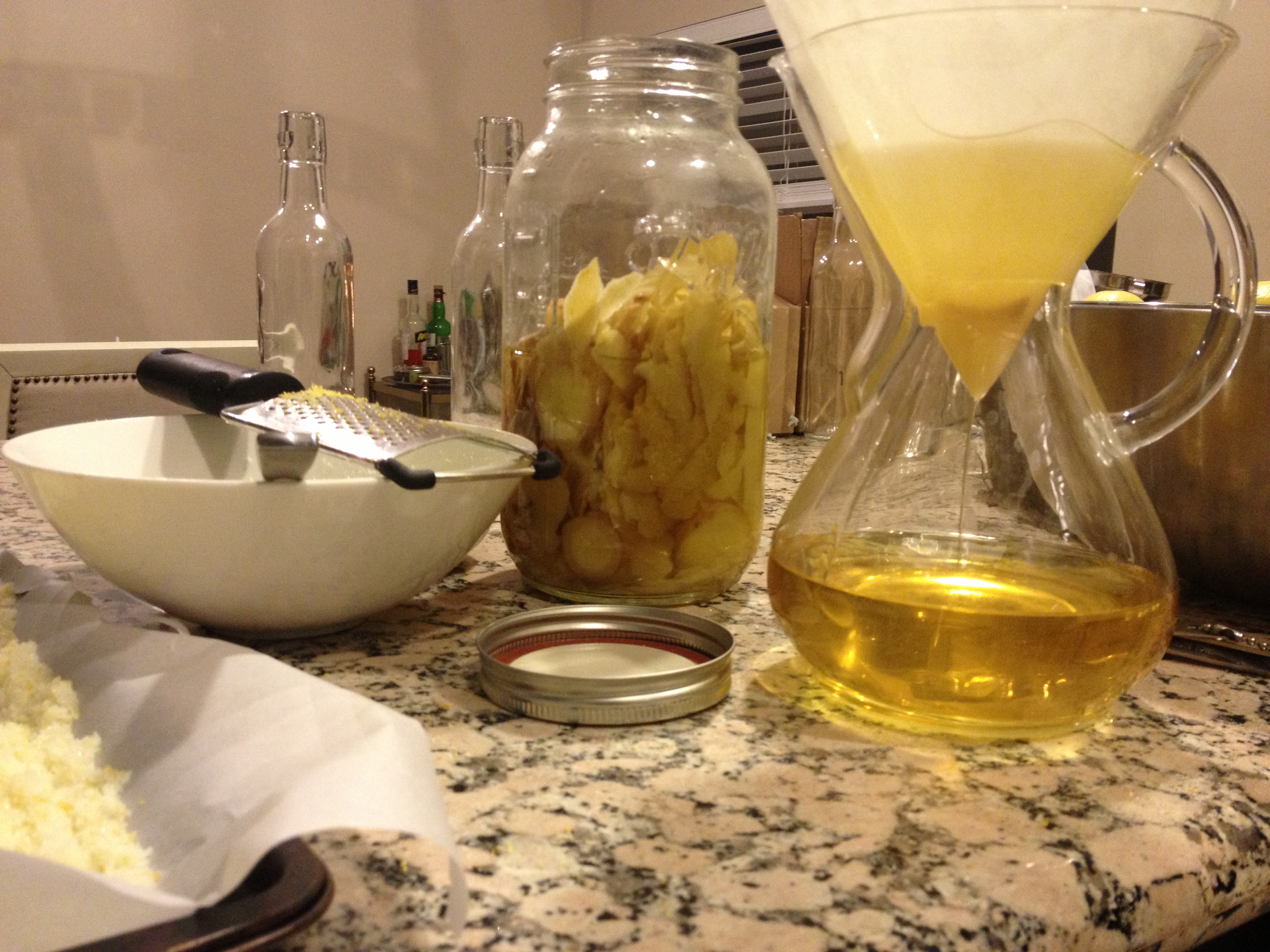 I used my Chemex to filter the lemon infused vodka which made it really nice and clear. You can see the little chunks of ginger in the steeping jar too.

I also made Lemon Sugar, Lemon Pepper Salt.  After zesting all those lemons I had a bunch of fruit left and so I juiced them all and made one bottle of Lemon Syrup.  I need to do that again because that syrup was amazing and I keep thinking about it. 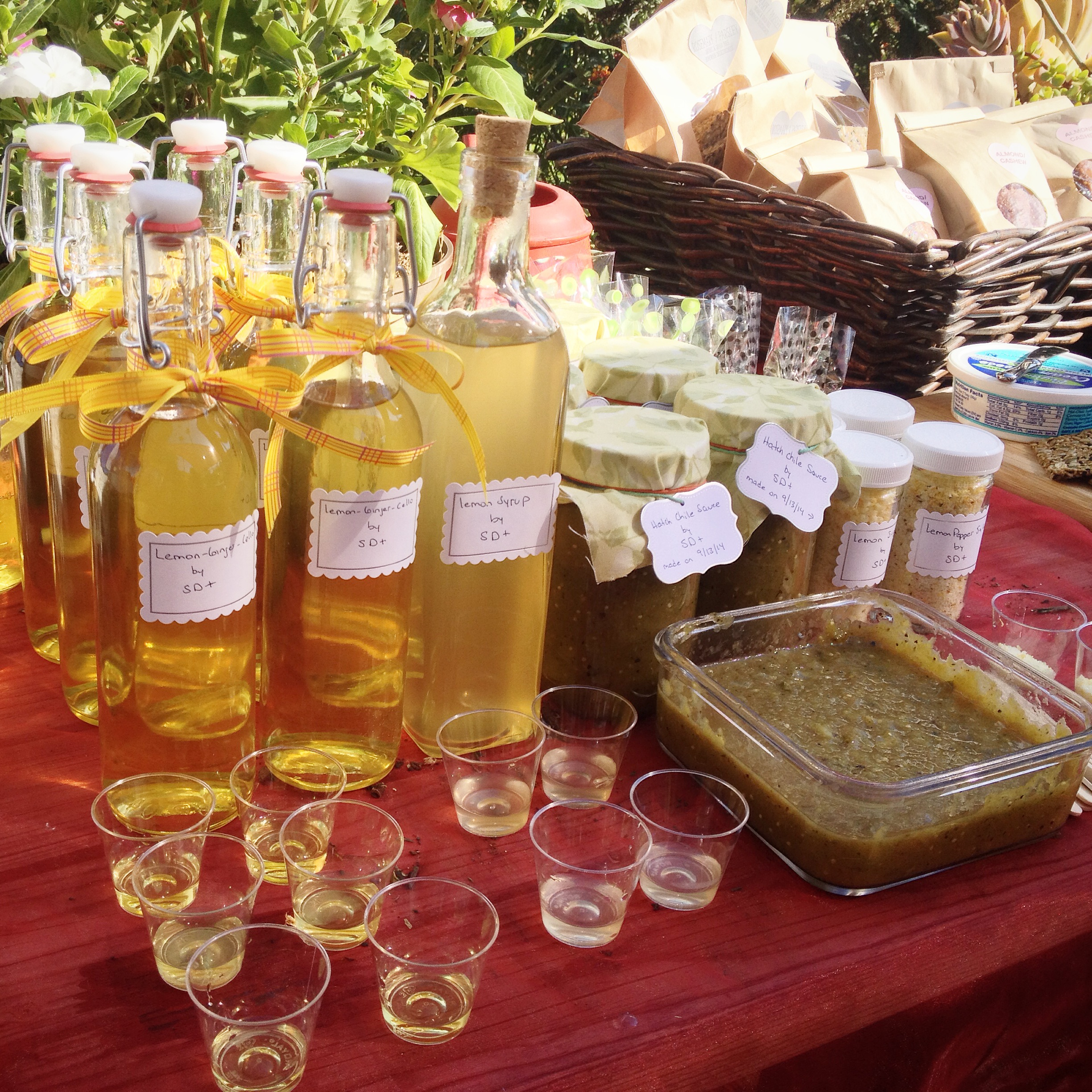 My pretty display at the Food Swap. My friend was right, the booze was a hit as was the green chile sauce.

The other participants made lots of cool stuff: jams, jellies, fully loaded bloody mary mix, muffins, breads, vinegars, and so much more.  I was really impressed.  I was pretty pleased with my loot, espcially the Aji Verde Peruvian Green Chile Sauce.  That didn’t last long in my possession. 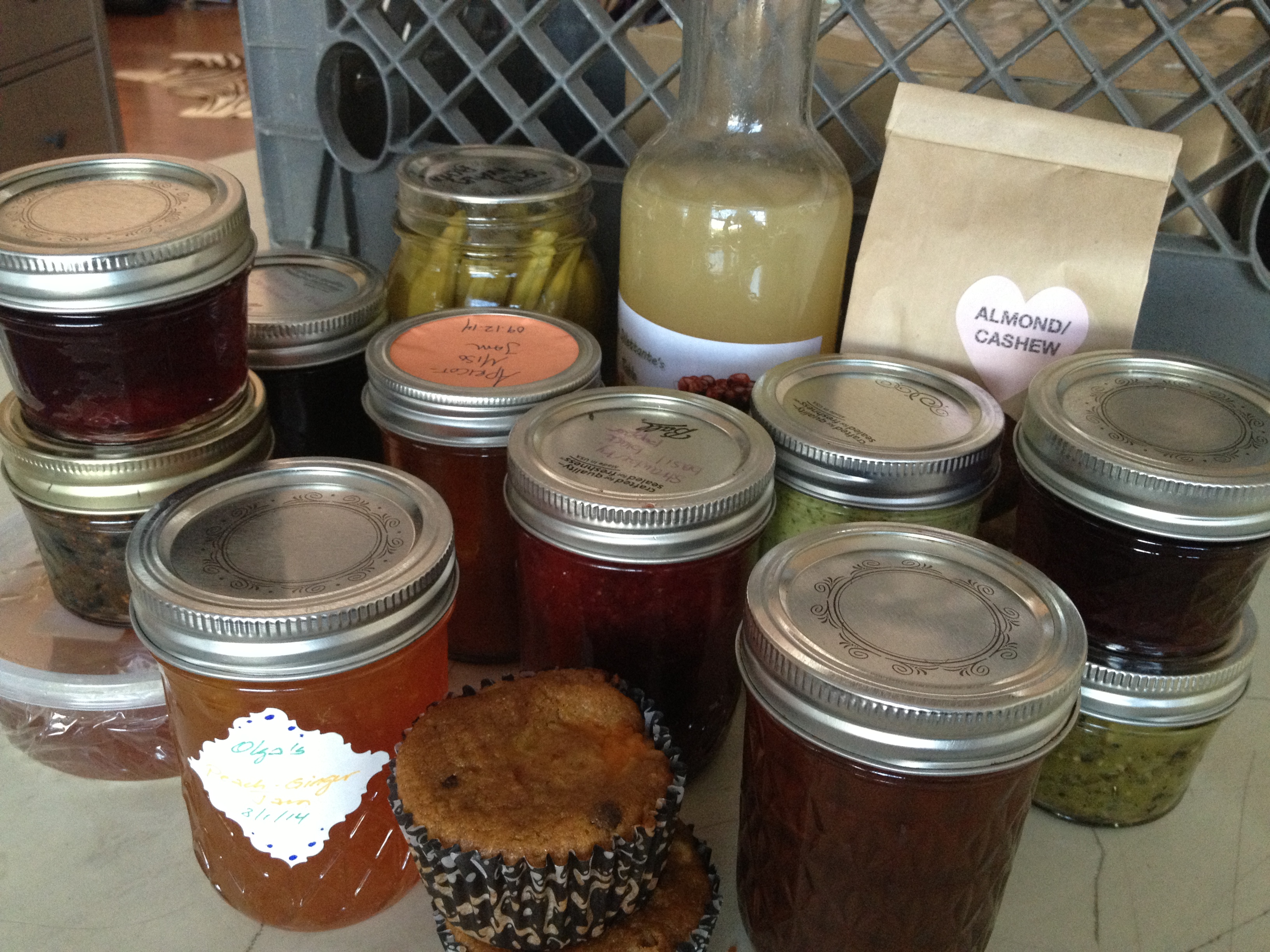 All the goodies I traded for

I still have some green chiles left in the freezer. One small bag to be exact and you know what. I’m totally doing it again next season.

Do you have any hatch chile recipes?  Are there any other seasonal foods you acquire in bulk?  Share your story in the comments!

CSA Away: New Orleans in December | The Delightful Table December 31, 2014

[…] celebrate” like drinking out of a champagne flute.  I had made lemon syrup as part of my Food Swap experience and decided to make grapefruit syrup for the cocktail.  I didn’t want to have to […]